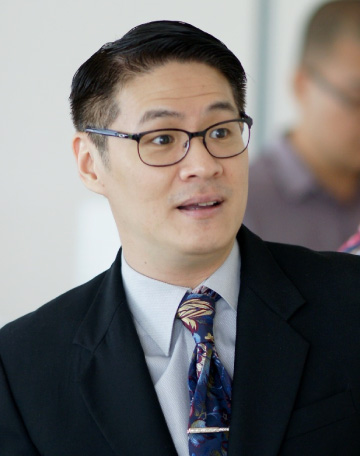 Professorial Chairholder in Literature (Polytechnic University of the Philippines)

A critic and academic publisher, David Jonathan Yu Bayot teaches literature and literary criticism at De La Salle University (Manila, Philippines) where he is the Executive Publisher of its university press, the De La Salle University Publishing House (DLSUPH). He is the general editor of the Critics in Conversation series published by DLSUPH and the general editor of the Critical Voices series published by Sussex Academic Press (SAP). He holds a PhD from DLSU.

Bayot is the author / coauthor / editor / coeditor of more than twenty books, most recently: a two-volume work, Circling the Canon: The Selected Book Reviews of Marjorie Perloff, 1969–2017 (U of New Mexico P, 2019); Siya Nga! Reflections with Art (DLSUPH, 2019) by Jose Ramon T. Villarin, SJ, which is a work of collaboration with a Jesuit priest-astrophysicist (as well as a President of Ateneo de Manila University) and contemporary Filipino visual artists (including National Artist Benedicto Cabrera, Justin Nuyda, Wig Tysmans, and Elmer Borlongan); and a volume in the DLSU Leadership Chronicle series, Ambassador Jose L. Cuisia, Jr.: A Life in Words and Pictures (DLSUPH, 2019).

The Critics in Conversation series received a special citation from the Manila Critics Circle on the 34th National Book Awards ceremony in 2015: “Citations are given to sets or series of books that push the frontiers not only of writing but also of publishing. The series in Literary / Cultural Studies of the De La Salle University Publishing House entitled Critics in Conversation, conceptualized and edited by David Jonathan Y. Bayot has put the Philippines on the world map of literary theory.” In this series, Bayot has dialogued with some of the most beautiful minds in the field of literary and cultural theory: Catherine Belsey, Jonathan Dollimore, Derek Attridge, Susan Stewart, Rachel Bowlby, John Schad, and Marjorie Perloff.

As editor, Bayot’s first collaborative work with Marjorie Perloff resulted in Poetics in a New Key. The book was first published by DLSU Publishing House in 2013 and became the first Philippine book in the country’s publishing history to be issued an international edition by the University of Chicago Press in 2014. And as general editor of the Critical Voices series, Bayot has worked with two deconstruction scholars and critics: J. Hillis Miller on Reading Inside Out (DLSUPH and SAP, 2017) and Christopher Norris on Deconstruction After All (DLSUPH and SAP, 2015) which was a Finalist for the National Book Award (Philippines).

Under Bayot’s directorship since the inception of the press in 2012, DLSUPH has actively expanded its publication activities by fostering its connections with renowned scholars in the international academic community; leaders in the corporate world; and international presses like Palgrave Macmillan, Springer, and Sussex AP. Bayot’s conviction on the value of Philippine art publication has led to a book that’s unique in the context of Philippine university press: a two-volume work on the life and work of the painter Betsy Westendorp (2018), which was a Finalist for the National Book Award (Philippines).

Born in Manila in 1970, Bayot was raised in a polyglot environment. He grew up and had his pre-college education in a context where communications were interlinguistic: in Fujianese (his first language), Filipino (or Tagalog), and Mandarin Chinese. He considers English, his fourth linguistic acquisition, to be his first foreign language because he said he never felt at home in it, not until he was already in his mid-twenties. Asked about his enthusiasm for keeping up with languages foreign to his milieu—French, Spanish, Cantonese, and Italian—he explained that “this endeavor, though foreign in many senses, has always reminded me of my childhood and home, as it also allows me to live home (from) elsewhere.”